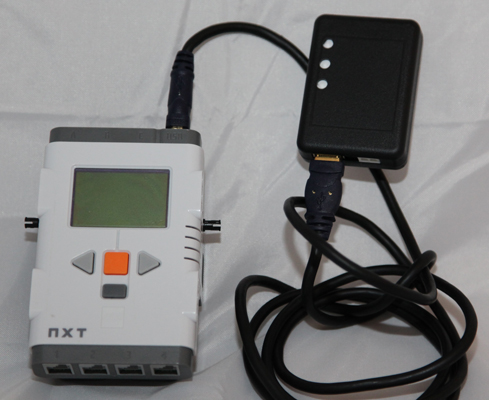 Teams participating in the First Tech Challenge (FTC) robotics competition are required to use the Lego Mindstorms NXT brick  to control their robot's functions.  Prior to the start of each match the Field Management System (FMS) which is responsible for synchronizing the game play must associate with the NXT brick of each robot participating in the match.

An additional challenge was the presence of cell phones in the game play area.  The Field Management System (FMS) runs on a windows platform using the the Microsoft windows bluetooth stack which was easily confused by passing cell phones. The net effect was that the robots did not receive the signal to start their autonomous mode program and lay motionless on the field. Once autonomous mode completed the FMS was responsible starting the teleop program on each robot and relaying operator commands from the attached joysticks to the respective robots. However, no matter how frantically the operators moved their joystick controls, the robots did not respond.

Although there were several factors involved, among the issues were problems with the bluetooth stack on Windows combined with the turnaround time for bluetooth on the NXT.  Our goal was to come up with a way to ensure that we could readily and reliably provide connectivity to the NXT from the FMS.

Wireless Options that we considered 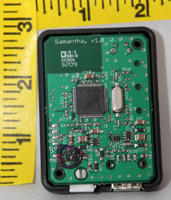 Wireless Configuration of the SAMANTHA

The challenge here is that there really is no user interface on the module for entering information.  Some wireless networks are WPA/WEP protected with SSIDs that may or may not be broadcast.  Additionally in an environment there may be multiple wireless networks and the strongest/most open may actually not be the appropriate one to use.  For this reason, SAMANTHA will need to have an internal list of wireless networks it is to connect to and in what order.  This list will be stored internally on the flash for the processor but we will need the ability to update it.  Options to update it include:

#3 and #4 are the preferred options as they are the least error prone and easiest for a user to understand.  #4 has a real nice option in that you could have different configurations for different routers (such as one for the pits and one for the competition) which would ensure that people aren't even trying to talk to the samr network that is running a competition.  #3 gives the ability to do other configurations to the device.

Based on discussions the current design approach is to implement options 3, 6 and 4 in that order to give us the most flexibility.  Since there is a need to store config files on the NXT for other reasons, and since SAMANTHA has to read the team number from a config file, making it read a wireless config file is a small delta in code.

One additional feature that could be considered is that we could write a program for the NXT which listens to SAMANTHA and can display the network configuration or other diagnostic messages.  Such a program is small enough that we could even store it on SAMANTHA and have it download it/execute it when we need to get diagnostics (such as Access Points available, signal strength

Bugs can be entered at http://samorept.toebes.com/

Bugs can be entered at http://john.toebes.com/samorept/

Fixed prior to numbering of images